What Will Be One Year Mutual Fund Return? 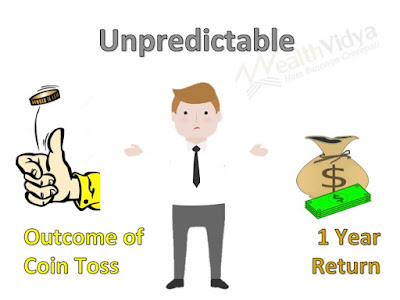 How much return will I get if I invest 1000 Rs per month for 1 year in a mutual fund?

Dear Friend!
Thank you for raising a very pertinent question.
The answer is not simple and straightforward. The reason being that one year is too small a period for predicting the expected returns. Instead of one year, if you had asked me what returns can be expected in 20–30 years, I would have confidently said that you can expect a return of over 15% compounded annual growth rate (CAGR).
However when the investment horizon becomes small it becomes nearly impossible to predict.
Why?

In the short-term the markets could behave in extremes. The market could surge by about 20–25% in an year or could crash by about 25–50%.
The triggers for such an extreme event could local as well as global events.
Suppose the US attacks North Korea and a full-blown war erupts, then globally markets will crash. Similarly if the weather is good globally in a particular year, resulting in good crops and farm income globally the markets could advance by about 15–20%.
In the long run the extremities tend to get evened out and we will get an average pattern.
You can understand this phenomenon from the probable outcome of tossing up a coin. If you toss the coin only for five times, then perhaps you may get heads four times and tails only once. However if you toss the coin a thousand times, most probably you will end up with both head and tails equally. That is in a large number the extremities get evened out.
But, why Invest only for an year?
Dear Friend! When you are talking investments please never think in terms of one year or three years or even five years. At least think of 15–20 years. 30–35 years are ideal.
Why?
Investing wealth is not created out great intelligence. Only time creates lasting wealth through the power of the ‘Miracle of Compounding’.
I broached this topic without your asking since I did not want you to miss the more important investment learning.
Thank you,
With Best Regards
Anand