Is it Better to Start Investing Early?

When asked what was the secret behind his phenomenal investing success, Warren Buffett quipped that he was fortunate to have had an early start. It seems that he used to visit his father's office, who was a stockbroker at the age nine and if I am not mistaken, bought his first stock at the age of eleven. Nothing can be more true or revealing than Buffett's admission about long-term stock market investing and wealth creation, for indeed the real secret lies not in the investing genius but in the power of compounding. So is it better to start investing early?, the answer is an emphatic yes, as in the proverbial saying, "Early Birds Catch the Prey". 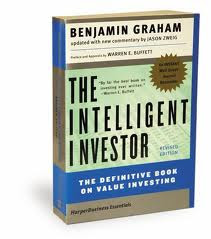 In my opinion perhaps the educations system should include investing in the middle school curriculum and introduce an abridged version of Benjamin Graham's book, "The Intelligent Investor". Then children can start learning investing from 12 years onwards, can save the money received as gifts on birthday and other occasions in savings account to begin with.  On completing 18 years they can open trading and dematerialised (Demat)  accounts and start investing.  They may require guidance and supervision both from parents as well as experts till they can manage investments on their own.


While starting early does give a clear advantage, those who could not need not loose heart. Significant wealth creation is still possible with an investment horizon of 20 to 25 years.  Assuming that an adult can expect to live a healthy life till about 75 years, even people who could start only at say 50 can still achieve good results.

I present below a comparison of potential results achieved by a person who started at 25 and other who started at 55 and we evaluate the results when both have completed 75. 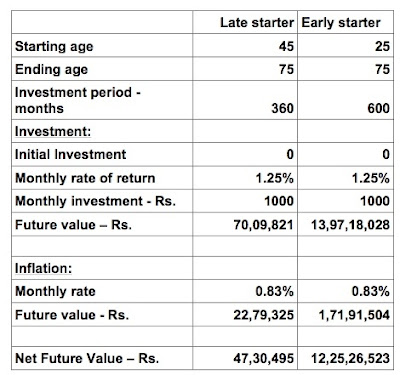 See the huge difference between the wealth created by an early and a late starter.  But the monthly investment amount we have kept constant for both at a very very humble Rs.1000 (US$ 15) per month.  The late starter can increase his success slightly by compensating the lost time with a higher monthly contribution.

But please note that real wealth creator is the long timeframe rather than the quantum of either the initial or monthly investment amount.

To summarise, is it better to start investing early? Indeed it is beneficial to follow in the footsteps of Warren Buffett, study Benjamin Graham's classic work, "The Intelligent Investor", and start investing early - for early birds do catch the prey!  We have seen that by starting early, even with a humble investment of just Rs.1000 (US$ 15) a month by way of a systematic investment plan (SIP), an early starter can create a huge and significant wealth of Rs.122 millions over a period of 50 years.